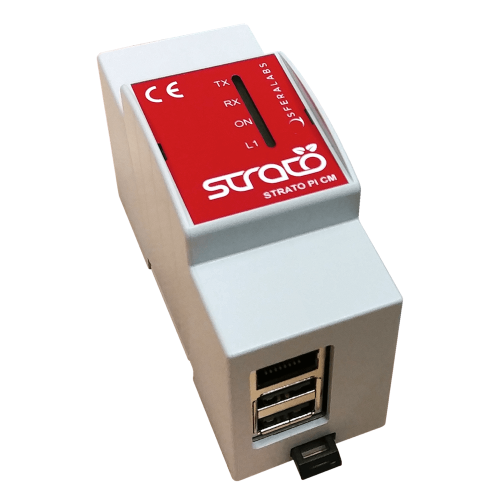 Strato Pi CM Duo is an extremely powerful and compact industrial server based on Raspberry Pi Compute Module, suitable for use in industrial and professional applications where reliability and service continuity are key requirements.

Fundamental requirements for high-reliability systems, which must guarantee a functional life cycle of many years, are data integrity and redundancy and often the ability of performing a full-system upgrade while operating in remote locations.

The Raspberry Pi Compute Module Lite has two buses for connecting a primary SD card (where the system boots from) and a secondary one.

The SD card to boot from can be configured for a switch upon scheduled power-cycle or upon a configurable number of subsequent watchdog timeout resets.

Strato Pi CM Duo can also be used with the Compute Modules with embedded eMMC flash storage. On these boards only the secondary bus is available and can be routed to the two SD cards, even at runtime, for storage failover or to add additional space.

A hardware watchdog is an electronic circuit that can reset the processor if, for any reason, the software application appears to be stuck. An automatic hardware restart after a software hang can save your day, particularly on unattended applications that need to work continuously.

Taking advantage of the Strato Pi CM on-board micro-controller, we have implemented a hardware watchdog circuit that can be used, upon a software hang, to reset the Raspberry Pi CM.

On Strato Pi CM Duo, the watchdog can also be configured to automatically switch the SD card used for booting the system when the reset is triggered.

The Strato Pi watchdog is completely independent from the Raspberry Pi’s internal CPU watchdog circuit and, being controlled by Raspberry Pi’s GPIO pins, it is extremely easy to control from your application and very effective in recovering from unexpected malfunction.

USB connected peripherals, such as modems or external storage, can sometimes hang or even cause a system fault for draining too much current.

Strato Pi CM Duo has two USB ports power-controlled by the MIC2076, a MOSFET switch optimized for power distribution with circuit protection. The MIC2076 is internally current limited and has thermal shutdown that protects the device and load. A fault status output flag is asserted during overcurrent and thermal shutdown conditions.

The power-enable inputs and the fault status outputs are routed to the Raspberry Pi’s GPIO to easily control and monitor the connected devices from your application.