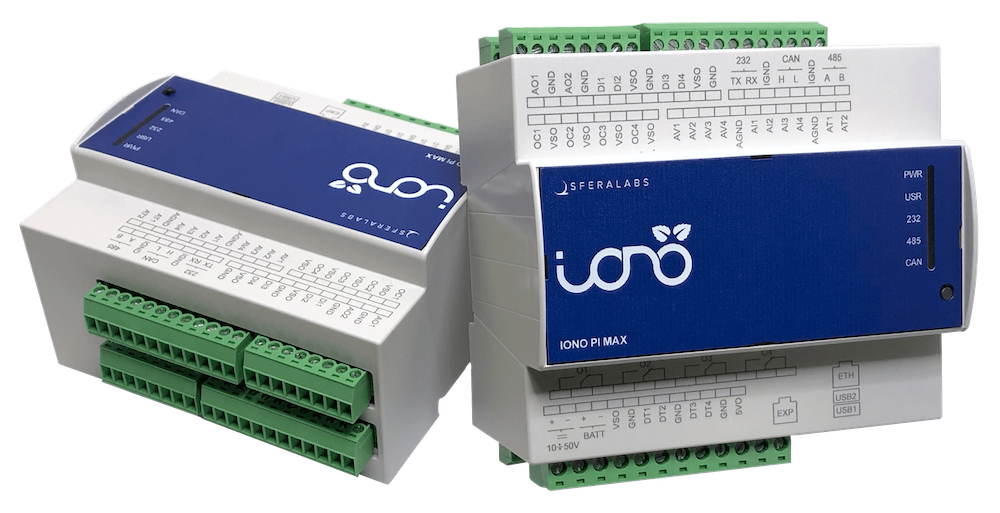 Iono Pi Max is the wildcard platform for edge computing and industrial control.

Iono Pi Max is an extremely versatile industrial server with a huge variety of Input/Output lines and standard communication interfaces, all routed to the incredibly powerful quad-core processor of the Raspberry Pi.

Iono Pi Max can be used for an incredible range of applications, from data acquisition and control, to home and building automation, as well as access control, hotel room control solutions, environmental monitoring and many many others.

Anything that runs on a Raspberry Pi, runs on Iono Pi Max

On Iono Pi Max you can program and run anything from a simple shell script to a full-fledged Java server in a Docker container.

All I/O and system control operations and configuration are performed via GPIO control and I2C communication, and if that is not easy enough, our Linux kernel module will let you do everything by simply writing/reading files.
RS-485/232 interfaces are simply routed to the UART and the USB bus of the Raspberry Pi. In Linux terms, you’ll just need to read/write to a /dev/ttyXXX path.
The CAN controller is operated via SPI and natively supported by the SocketCAN framework, which most CAN-enabled tools build upon.

Switch a relay from command line:

Send a Modbus request on the RS-485 bus in a shell script:

Ready for industrial and residential installations

Iono Pi Max can be employed both in industrial and residential environments, for professional applications where extreme reliability, ruggedness and compliance with technical and safety directives are required. 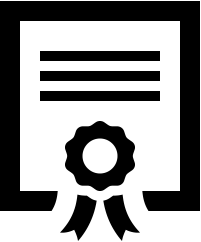 Iono Pi Max accepts a wide power supply range, from 10 to 55VDC, and is able to handle substantial amounts of ripple, noise and supply voltage fluctuations. The power supply stage is a heavily protected and filtered circuit, using oversized electrolytic capacitors, diodes and inductors, and a high efficiency voltage regulator. It can deliver up to 4A to the 5V supply rail of the Raspberry Compute Module and USB ports.

Integration with heterogeneous systems and devices is a key requirement in modern applications. The ability to collect field sensors’ data and interfacing with external systems is what more often than not determines the adoption of a solution.

Six digital inputs, accepting up to 30V signals, let you integrate digital counters as well as general status signals. Furthermore, four additional low-voltage (0-5V) digital I/O can be employed as supplementary inputs or as data lines for interfacing with devices using digital protocols such as 1-Wire, Wiegand, or even proprietary/custom protocols.

Dedicated RS-232, and opto-isolated RS-485 and CAN interfaces can be used simultaneously to communicate with a huge variety of systems commonly found in industrial, residential, and automotive industries. The CAN interface supports CAN 2.0B and CAN-FD, with up to 8 Mbps bitrate.

All I/O lines and interfaces can be managed both from the Raspberry Pi module and the micro-controller.

The UPS supports 12V and 24V lead batteries. It keeps the battery charged with optimal charging current (independent from the main supply voltage) and seamlessly switches without any operation interruption when the main power supply fails.

Battery state and charge level can be monitored and automatic over/under-current protection mechanisms keep the battery in safe conditions.

Any system needs updates and, often, security patches must be applied to low level operating system components or even to the micro-controller’s firmware.

And while your application is running, a brand new firmware can be downloaded by the Raspberry Pi and uploaded to the micro-controller without any service interruption. And, using tools like OpenOCD, you can even perform, from the Pi, on-chip debugging of the firmware running on the micro-controller.

Other than the ability to control the external environment, self-diagnosis is of extreme importance for dependable control systems.

Iono Pi Max implements several mechanisms to make sure your applications are running flawlessly, under the expected conditions.

The hardware watchdog monitors a heartbeat signal on a GPIO and, if a hang occurs, the Raspberry Pi module is automatically reset. The watchdog can also be configured to automatically switch the boot SD card upon consecutive failed restarts.

Both mains and battery power inputs, as well as the the auxiliary power output, are monitored in voltage and current draw.

USB ports are current limited and have thermal shutdown protecting the device and the connected loads.

Internal temperatures can be monitored and an embedded fan can be controlled to improve heat dissipation.

All the internal measurements and fault statuses are available to your application to trigger notifications and/or take action to restore normal functionality.

On the front panel, Iono Pi Max has a set of RGB LEDs showing mains/battery power status, selected boot SD card, and RS-232, RS-485, and CAN activity. All LEDs can be reconfigured to be controlled by your application.

Also, a button and an internal buzzer let the user directly interact and get confirmation or warning signals from your application.

An internal, power-controllable USB port is available for connecting devices such as Wifi or hardware-license dongles, while protecting them from easy access and removal. 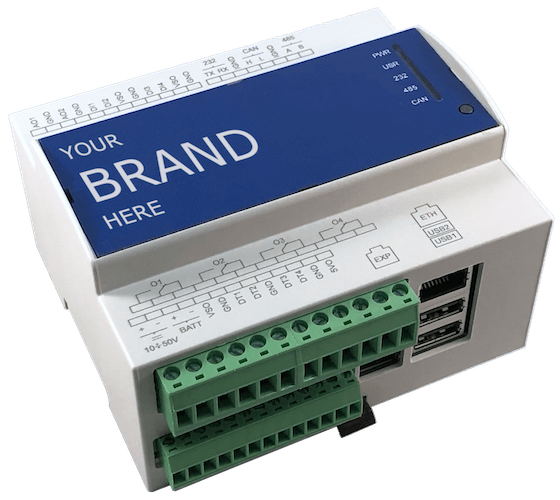 You can customize Iono Pi Max from branding to hardware features 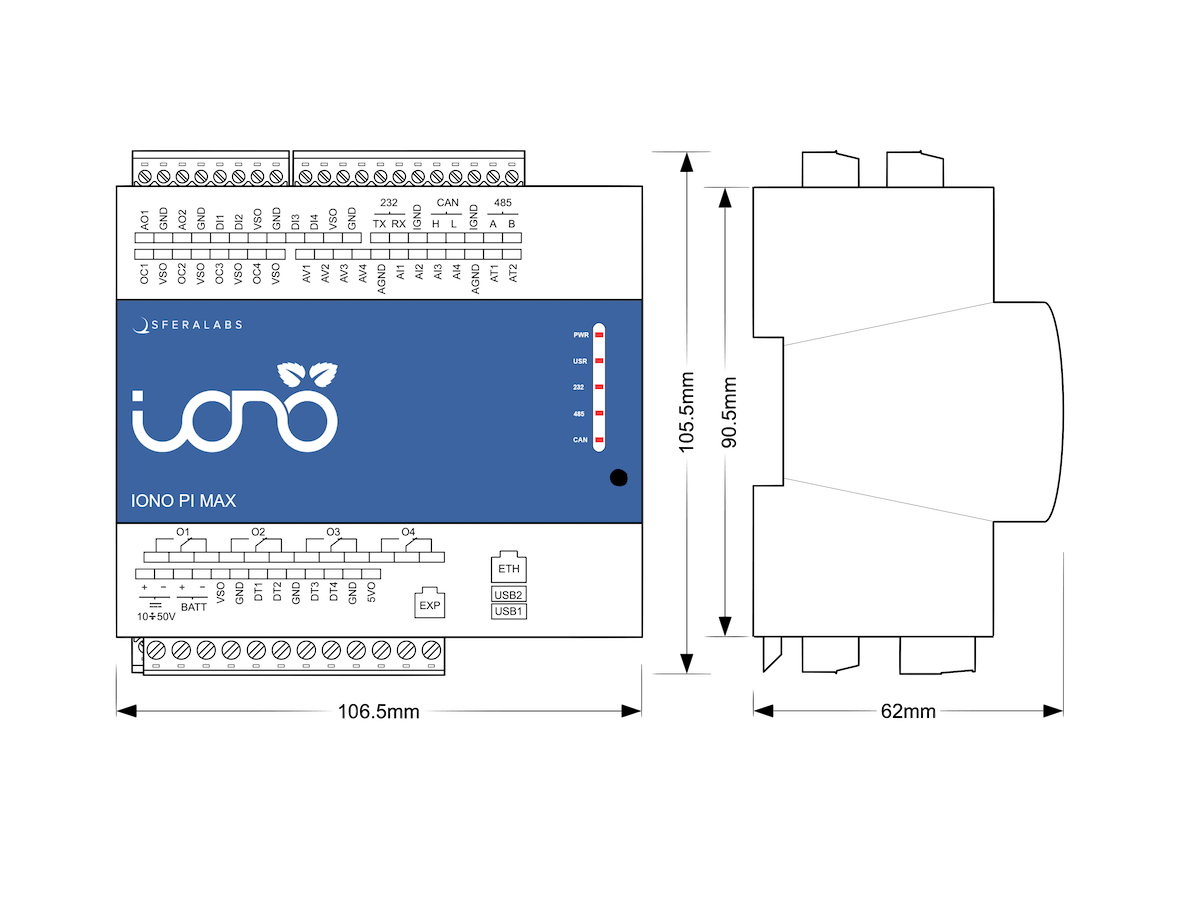 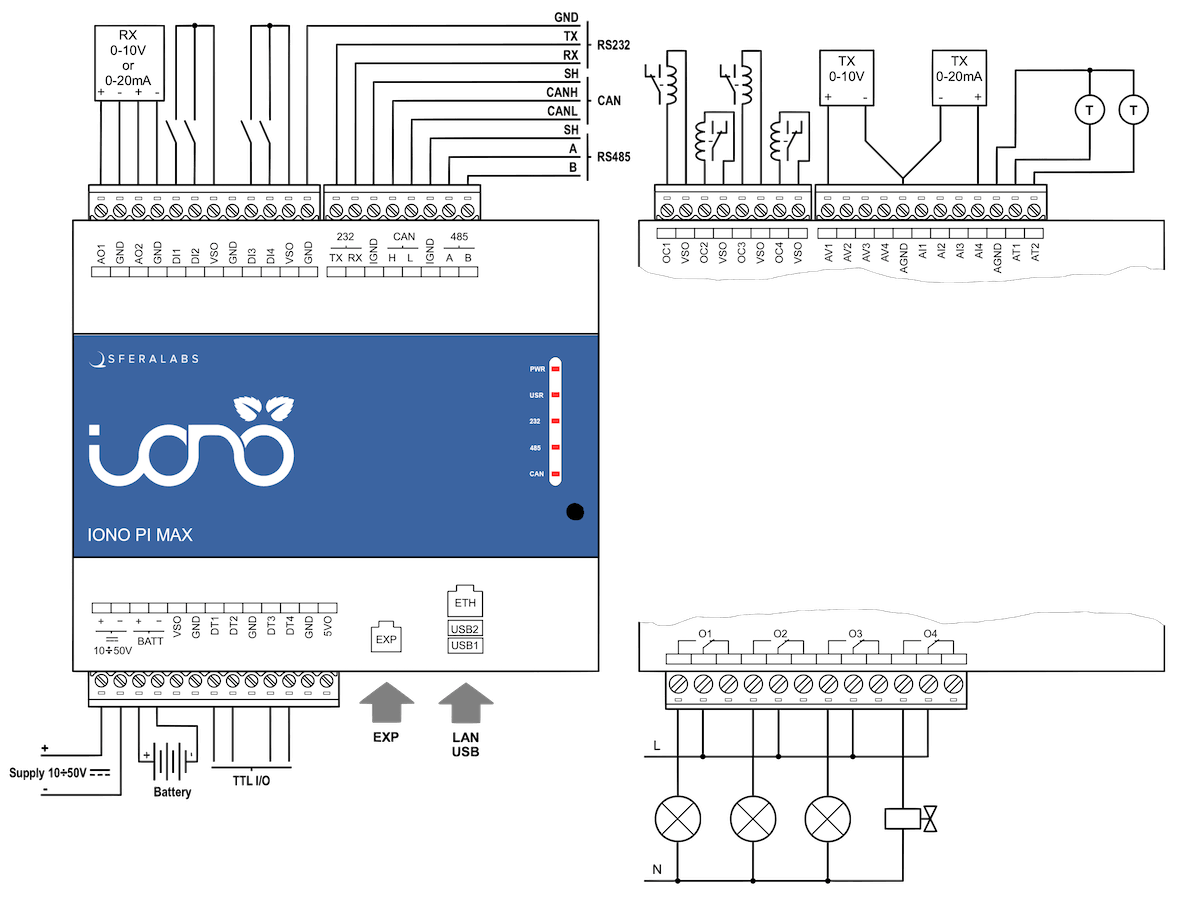 Head to GitHub for our set of drivers, resources and examples for your Iono Pi Max. Bear in mind that you don’t need any specific driver or library for Iono Pi Max, as is transparently compatible with anything running on Raspberry Pi; our resources will just provide you with some handy tools to speed up your development.

YES, WE ARE OPEN!

Customer service and technical teams
are available to assist you.